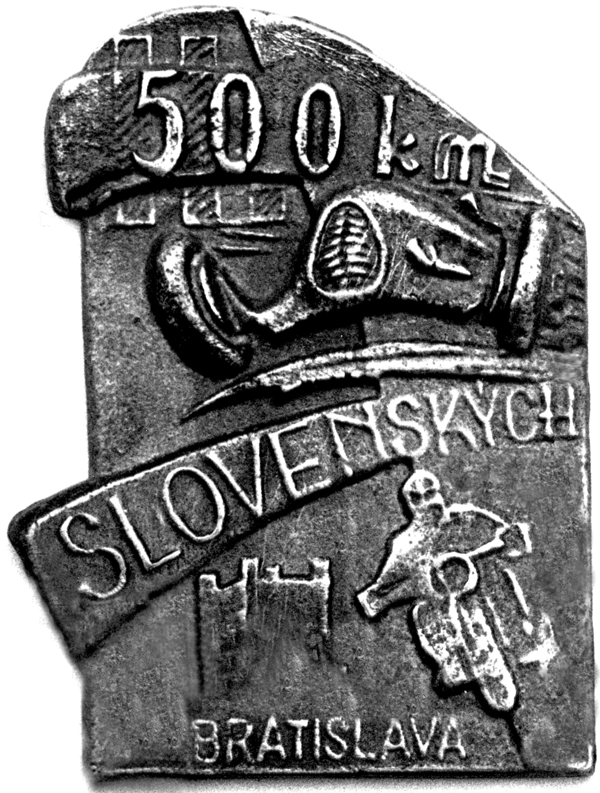 The race “500 km of Slovakia” was held on open public roads in the years 1937 and 1938. The track copied the circle Bratislava – Malacky – Baba – Pezinok – Bratislava.

The circle was run 5 times, so the total length of the race was 500 kilometers. Personal cars and motorcycles participated in the race. The participants were divided into the following categories:

The race was organized by Slovenský Motoklub and the race started in front of the Club-house on Šafárik Square.

The first race was started on June 20th. 1937 at very bad weather. On the heavy roads several drivers had accidents, especially on the curves of the hill climb Baba. Ján Kubíček on a Bugatti automobile with a built in Ford motor became the absolute winner with a total driving time 5 hours,12 minutes, 3 seconds. The fastest driver on an automobile of Czechoslovak production was Vojtěchovský with his Aero 50. Antonín Vitvar with a Jawa 700 car was very successful in the competition with stronger cars.. Kostlivec racing on a BMW 500 ccm became the absolute winner in the Motorcycle category riding 5 hours, 25 minutes, 22 seconds.

In the private racers group Jaroslav Bartošek from Slovakia won with his BMW 500 ccm. He later became a well-known motorsport activist, who tragically passed away after an accident on the Grand Prix of Czechoslovakia in Brno.

The second year started with a ceremony on Šafárik Square on June 26th. 1938. The cars started at 9:00 h, while the mass start of motorcycles took place at 9:05 h. 21 automobiles and 30 motorcycles participated. 9 automobiles and 9 motorcycles did finish the race, among them Vojtěchovský, Mikulc, Kubíček, Kostlivec.

In 1973 Dr. Vlastimil Mareš, well known motor-sportsman from Veteran Car Club Bratislava-Rusovce has suggested to re-vitalize the largest Slovak pre-war motorcar race “500 km of Slovakia”. In 1974 the club organized the very first vintage car event in Slovakia. The memorial run “500 km of Slovakia” was held as a regularity run on the original track and the participants absolved it once. The Event was very successful, both for the participants as well as for the public. Veteran Car Club Bratislava-Rusovce organized the event also in following years. The 5th jubilee year was already international with 66 cars and 33 motorcycles. The formal start was performed by Elisabeth Junek.

An interesting change in the event was done in 1990 when the organizer changed the concept and in reaction to the post-communist revolution time the track was chosen from Bratislava to Vienna and return. The race was held under the auspices of Mr. Helmut Zilk, the Mayor of Vienna.

Besides the 1993–1995 the memorial run was performed yearly. On May 8th 2004 the race started under the compelling name “The original 500 km of Slovakia”.

The long term tradition was interrupted in 2013 and it is our endeavor to re-new the tradition in cooperation with Veteran Klub Bratislava. 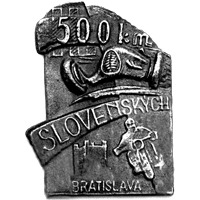